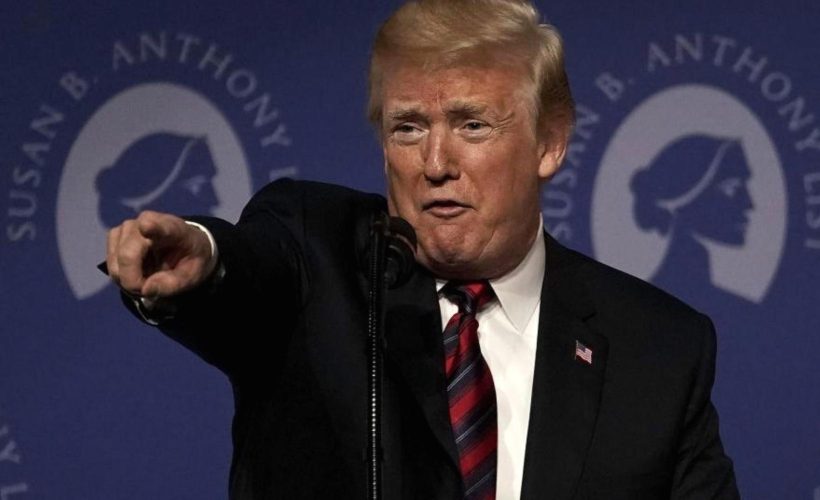 President Donald Trump on Tuesday issued a rallying call to opponents of abortion, encouraging them to head to the polls to elect conservative lawmakers.

Speaking at the Susan B. Anthony List’s annual “Campaign for Life Gala,” Trump took a victory lap for his anti-abortion policies and nominations of conservative justices to federal courts. But he warned the group that they must show up at the polls to preserve their gains under his administration.

“Every day between now and November we must work together to elect more lawmakers who share our values, cherish our heritage, and proudly stand for life,” Trump said. He summed it up for the roomful of enthusiastic supporters: “The story is, `18 midterms, we need Republicans.”

Trump has long been an unlikely sweetheart for conservative and evangelical voters. But now, in the lead-up to the midterm elections, the thrice-married former Democrat who used to describe himself as “very pro-choice” has been offering catnip to conservatives.

Last week, the administration unveiled a new push to strip funding from Planned Parenthood and other family planning clinics. The initiative, which was formally unveiled Tuesday, is aimed at resurrecting parts of a Reagan-era mandate banning federally funded family planning clinics from referring women for abortions, or sharing space with abortion providers.

And it arrived just in time for Trump to highlight it Tuesday at the gala. The speech, said one administration official, had been aimed at a core constituency of conservative activists who are seen as key to energizing the party entering the fall midterm elections.

Trump, for his part, promised a “massive campaign” to assist Republicans this fall, and highlighted his role contributing toward the Republican National Committee’s fundraising haul.
“Your vote in 2018 is every bit as important as your vote in 2016,” Trump said, reading off a teleprompter. He paused before telling the crowd, “I’m not sure I really believe that. “I don’t know who the hell wrote that line,” he said, prompting laughs.

Marjorie Dannenfelser, president of the anti-abortion Susan B. Anthony List, branded Trump “the most pro-life President in history” at the Gala, and told the AP the move “will help tremendously” in the midterms.

It’s also the latest evidence that as he frets over the Russia investigation and prepares for a planned summit with North Korea, Trump has also been focused on fulfilling campaign promises and tending to issues that galvanize his base: holding a series of events to rail against the dangers of illegal immigration, pulling out of the Iran-nuclear deal and wading anew into the fight over abortion rights.

During the campaign, he sometimes had trouble articulating his views on abortion, at one point suggesting women should be punished for having abortions. His campaign later walked back the statement, saying that if abortion were ever outlawed, he believed that doctors who perform them should be punished.

Nonetheless, white evangelical voters overwhelmingly supported Trump in 2016, and that support has only grown. A PRRI survey released last month found white evangelical support for Trump at an all-time high, with 75 percent of those polled holding a favorable view of the president and just 22 percent holding an unfavorable view. Support for Trump within the general population in the poll stood at just 42 percent.

Religious groups like the Catholic Medical Association approve of a series of actions Trump has taken, beginning with his appointment of judges who oppose abortion rights, including Supreme Court Justice Neil Gorsuch, and Trump’s reinstatement of the global “gag rule” that bars federal funding for nongovernmental organizations that provide abortion referrals.

Dannenfelser, whose group works to elect candidates who want to reduce and ultimately end abortion, is planning to raise and spend $25 million this cycle, up from the $18 million the group spent in the lead-up to the 2016 elections.

She said the president’s latest move would play especially well with voters in states like Missouri, where Republican Attorney General Josh Hawley is challenging Democratic Sen. Claire McCaskill, one of the Senate’s most vulnerable incumbents, as well as in Indiana and North Dakota, where Republican Rep. Kevin Cramer is challenging Democratic Sen. Heidi Heitkamp.

Abortion rights activists, meanwhile, argue that Trump’s moves on the issue will only embolden women to turn out at the polls, just as they took to the streets in marches after Trump’s election.
“It’s going to cost this administration at the ballot box in November,” said Planned Parenthood Federation of America’s Kevin Griffis.

“We have to fight back in the best way we know how,” the group Emily’s List wrote in a fundraising email, “electing pro-choice Democratic women who will always protect reproductive freedom.”

11 Hilarious Cat Caves That Look So Comfy, We Wish They Came in Our Size Next post